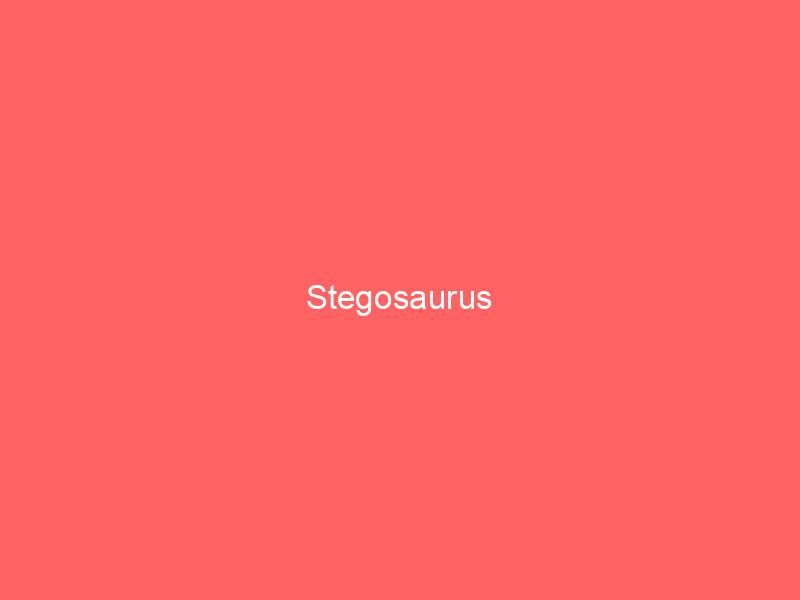 Stegosaurus was a genus of large dinosaurs that inhabited our planet during the Jurassic period (about 148 million years ago). It is classified within the group of the dinosaurs thyrosaurus stegosaurus.

This genus would have had a large size compared to the other dinosaurs. It was about 9 meters long and almost 4 meters high. It weighed about 9 tons in adult specimens.

With large plates on its back and a powerful weapon on its tail, it walked on all four legs and was bold enough to face any predator.

Have you found this information about the Stegosaurus interesting? Then stay with us and read on to find out all about this herbivorous dinosaur from the Jurassic period!

What does the name Stegosaurus mean?

This Stegosauridae was first discovered during an expedition to Morrison-Colorado in 1877. Later that year, the paleontologist Othniel Charles Marsh described this discovery and named it Stegosaurus armatus.

However, the discovery of this dinosaur brought with it a great enigma, what was the function and arrangement of the plates? Marsh assumed at the time that the bony plates found covered its entire back, as if it were a roof.

It was later concluded that this concept was wrong and that these plates were actually arranged in a linear fashion, with their narrowest part facing upwards.

Another question was how were the plates aligned: transversely or longitudinally? With respect to this question, the researchers estimated that the bone plates were arranged in two staggered rows and in the same direction, following the same path as the spine.

As for the function, several hypotheses emerged, such as that they fulfilled a thermoregulatory function or that they were used as a defence. But we will talk about this in depth later on in this article.

Later on, more fossilized remains of this majestic dinosaur were found and some more species were determined. For example, the first species found, the already mentioned Stegosaurus armatus, of which there were partial parts of the skull and skeleton, but what characterized it apart from the dorsal plates were four spikes at the end of its tail.

In 1887, two more species were described by Marh himself, the first was called Stegosaurus sulcatus and the other Stegosaurus stenops. The latter had a nearly complete skeleton and a full skull, and was observed to be slightly smaller than S. armatus.

Finally, another species, Stegosaurus longispinus, was found, which was characterized by relatively longer spines on its tail compared to the other species. It was described by the American palaeontologist Charles W. Gilmore from a partial skeleton found in the Morrison Formation.

Stegosaurus lived approximately 148 million years ago, in the late Jurassic period, in what is now North America. Although fossils have also been found in other places far from this point such as in Europe and Asia.

Its habitat was characterized by a rather arid and dry environment, which could also be endowed with extensive plains. Often it was also found on the banks of rivers, places that were characterized in the Jurassic for being rich in vegetation.

It is necessary to remember that in the Jurassic period the continents were united, there was only one continent Pangea, so the vegetation was only found at the riverbanks and in the coastal areas.

This dinosaur was a quadruped that averaged about 9 meters long, reached about 3.7 meters in height and weighed about 8 tons. Besides, it had some sharp thorns in its tail that served to defend itself.

At first it was thought to be bipedal, because of the small size of its front legs. However, it was proved that they were four-footed. In fact, it had a somewhat hunched posture and a small head very close to the ground.

It was herbivorous and had small leaf-shaped teeth, but they were not found in the whole mouth. It is known that it had no teeth in the front of its mouth, instead the end of its snout was topped by a horn-shaped beak, which helped it to pluck the plants on which it fed.

This dinosaur was endowed with a tail that constantly swung back and forth. This tail was made up of 4 spines with an average size of 75 centimeters long, which were attached to the vertebra and protruded horizontally from it. Some species had two pairs of spines at the end of the tail, others had four pairs.

From this tail it is easy to deduce that it was used for combat. However, as far as dinosaurs are concerned, everything has to be checked and it was so in this case. So, at first, there was a debate about whether this tail was actually used as a weapon or it was just used as a social differentiator.

Researcher Robert Bakker postulated that this tail was flexible enough to be used as a weapon. In fact, Bakker also claimed that this dinosaur would have had the ability to stand on two legs and turn on its own axis, helping itself with its front legs.

The theory was reaffirmed by McWhinney as he analyzed the wound of an Alosaurus fossil and it was found that the wound in the spine of this predator fit a Stegosaurus spine perfectly.

They had a second brain?

First of all, it must be said that this dinosaur had a brain the size of a walnut. However, some scientists indicate that it was privileged with another brain. Such a brain was located in the back, more exactly in the hip region and it is presumed that the function of this brain was to control the reflexes of the hind limbs.

This hypothesis is not widely accepted today, it is even believed that in the hip cavity there was no brain but rather a place where this animal accumulated glycogen (complex carbohydrate), which could well be used as an energy reserve supply.

The same hip cavity has also been observed in some birds today, but it was probably an evolutionary convergence because the hip of the Stegosaurus was of the Ornitischian type, that is, similar to that of a bird, even though we know that the Ornitischian dinosaurs are not the ancestors of today’s birds.

The plates on its back what they were used for…

Regarding the function of the back plates, in 1977 Dr. James Farlow of Indiana University in Fort Wayne examined the plates and was able to demonstrate that they were designed so that large amounts of blood could circulate through them to absorb solar heat as needed or to use them as a thermoregulator to release body temperature into the atmosphere. It was hypothesized that this dinosaur was cold-blooded.

Later in 2005, a research team led by American paleontologist Kevin Padian, after further analysis of the internal bone structure of the plates, concluded that the plates actually had no function.

Because the blood vessel channels from which the blood was presumably circulating were often dead-end, the researchers rejected the theory that the plaques were used as thermoregulators.

Finally, it was also noted that there were no major differences between the female and male plaques. The team led by Padian therefore suggests that the back plates only served to identify animals of the same species more quickly. Here you can see a summary of the original study.

Fortunately for the Stegosaurus, it lived before the Tyrannosaurus rex roamed the face of the earth. However, there was already the Allosaurus, which was the largest carnivorous dinosaur of the Jurassic period and which surely made life impossible for it once and for all.

Because the Stegosaurus was a slow moving, heavy dinosaur, it didn’t have a chance to run away from danger, so it used its powerful tail as a defense. As the Stegosaurus did not have a very large brain, it probably only wagged its tail randomly in a violent, threatening way with its large, sharp spines.

Any predator that came close and took a direct hit from the tail was going to be badly hurt. In fact, a fossil of the Allosaurus has been found that was apparently injured by such a tail.

On the other hand, some clues point out or make it seem that Stegosaurus lived in herds, where young dinosaurs mixed with older ones. They moved together through the brush and the more experienced dinosaurs protected the younger ones from the dangers.

Some facts about Stegosaurus