The Yimenosaurus was a genus of dinosaur that inhabited our planet during the well-known Triassic period (specifically about 217 million years ago).

This genus of dinosaurs would have been about 9 meters long and no less than 3 meters high. It also weighed about one tonne.

Its name, which is Yimenosaurus, comes from the same Greek and has a meaning similar to “Yimen’s Lizard” in our language.

Interested in learning more? Below you will find much more information about the Yimenosaurus! Read on and… Find out all about this Jurassic herbivorous dinosaur!

As additional information we will talk about another specimen that is fundamental to understand the life of the Yimenosaurus, because with this new specimen we have mentioned it has been compared indefinitely, so it is really essential to know some basic things about the Plateosauridae.

These unique specimens are called Plateosauridae, which is a word of Greek origin which, when translated into our language, would mean something like the following: “flat reptiles” or “lizard planes“. 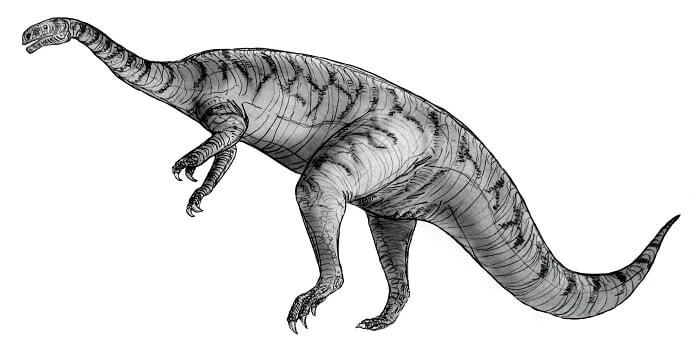 Drawing of a Plateosaurus, belonging to the Plateosauridae Family

The territory in which these animals lived was the European continent, it is also known that these creatures enjoyed a diet based on the consumption of vegetables, and because of this detail is that they could reach large sizes and also a great power to defend themselves from the most frequent threats.

It has also become known that this animal could move from one place to another using only its two extremities as well as its four extremities, the animal made the best decision according to the situation it was in.

Its cranial structure was quite interesting since it had a mandibular region that represented a hinge mechanism that was the most powerful of all these specimens.

Regarding the taxonomy of this specimen, we can say that it has been considered one of the prosauropods, as we have already mentioned, but recent studies have questioned the taxonomy carried out many years ago, so we cannot assure or affirm anything until the official pronouncements are made.

The length of this mysterious animal could have been almost 9 meters, while its height was about 3 meters, on its weight we can also say that it exceeded even 1000 kilograms.

If we look patiently at the structure of the skull of this animal we can clearly see that it is a smaller size but certainly inside it is noted that it has a considerable depth, therefore we can say that in height this structure is much larger compared to its length.

These qualities that we have just mentioned are also found in other specimens that belong to the sauropods group, but the curious thing is that these animals were able to live right after the protagonist of our article.

On the mandibular area we can say that it was not a very resistant structure, however, we can see that the area of the opening of this jaw had features of a suitable development and even of considerable dimensions.

These teeth had a necessary quality to survive in those days, they were compact, so they also enjoyed a shape similar to a spoon.

On the neck area, we can say in detail that it was a fairly strong structure that could even withstand high stresses, and we can also see that it locks into a structure with a considerable length.

On its bony elements, we can say that the sacrum was very robust, so much so that the scientists themselves were really surprised, as was the femur, which showed high resistance, without forgetting that its size was also considerable.

We can also provide some information about your fingers, as the fifth of them were smaller than the other fingers.

An interesting animal that was found in 1987 by the amateur Xingyong Zhang, a unique character who worked regularly in one of the most important museums in his country, the Provincial Museum which is located in Yunnan.

The discovery was able to collect more than 3000 kilograms of fossil remains, a group of elements that would later prove very beneficial for the study of these prehistoric animals.

It is for this reason that this group of remains was slowly prepared to be studied later, who were responsible for carrying out this work were the workers of an academy that was responsible for propagating and spreading culture in all its sense.

The place where this set of vestiges was found is now known as the Fengjiahe formation.

In short, we had to choose only some of the most complete structures and in a higher state of conservation, so that the studies can be carried out in a correct way and can give us data that will fill us with knowledge about the life of these prehistoric animals.

These structures were even compared with another specimen known as Plateosaurus, and also with another animal identified as Lufengosaurus.