The Arizonasaurus genus is not a genus of dinosaurs, but in fact, it is a genus that groups together some Rausiquian archosaurs specimens.

These specimens are in fact reptiles previous to the dinosaurs that inhabited our planet during the Triassic period, a period in which they were very predominant.

Its name comes from the Greek and literally means “Arizona Lizard“, due to the place where the first remains of this prehistoric animal were discovered.

The Arizonasaurus actually precedes the dinosaurs, in fact, we also find that the pterodactyls, plesiosaurs or the Dimetrodon, are in fact species that are often mistakenly considered as dinosaurs.

In this article, we will see the taxonomy of this animal, which will tell us exactly its classification, but you can also get all the information about the Arizonasaurus.

Along with other species, they are part of the family Ctenosauriscidae, whose animals were characterized by the candle they had on their backs, formed by the long neural spines of their vertebrae.

Ctenosauriscids were one of the first archosaurs and represent a very important part of the group.

They belong to the clad or order of the Rauisiquios, a different order to the one the dinosaurs belong to, therefore this classification leaves us no room for doubt since we must avoid confusing the genus Arizonasaurus with the dinosaurs.

The specimens of the genus we refer to here were successful predators that inhabited the Middle and Upper Triassic, dating back approximately 200 million years.

They belong to the Sauropsida class and are therefore closely related to the ancestors of today’s reptiles and birds.

Anatomical and physiological characteristics of the Arizonasaurus

We could say that the most outstanding characteristic is the sail that we find on its back, formed by the elongated spines of the vertebrae, and whose function is not yet determined, although there are certain theories presented by scientists, some with more acceptance than others.

The majority of the scientific community says that the candle was used to keep their body temperature under control, as the Arizonasaurus or other candle-bearing species could be in sunny places and absorb the sun’s rays in a better way because they had a larger surface area.

However, this function was also important when their body temperature was higher than normal, they could stop in a shaded place, and that temperature was more easily radiated outward through their wide sail.

Others argue that the candle’s temperature control system was inefficient, and present other theories about its use, such as sexual selection, where the candle was used to attract members of the opposite sex, a detail really necessary for the mating process, although this theory is also not widely accepted today.

There are those who say that it was not a sail, but rather a hump where they could have stored a material known as “fat” so that this element would provide them with energy when they needed it, just as bison do.

This theory can also be superimposed on the previous one since a specimen with successful hunting methods could have a larger hump, which would indicate optimal health and fitness, as well as possibly attract members of the opposite sex.

The Rauisiquios gave the Arizonasaurus the characteristic of having an upright posture, regardless of whether the dinosaurs had it or not, this was possible thanks to the famous vertical femur that moved in the acetabulum, what is known as pillar posture.

This pillar position was the one that offered him greater mobility than other animals of the Triassic period, which made hunting much easier.

It is estimated that the Arizonasaurus was about 300 centimeters long and a little less than 100 centimeters high, on its volume one can say it was over 200 kilograms, being even a little smaller than a common crocodile.

It was a quadruped, meaning that it walked using its four limbs, however, its bone structure could indicate that it was able to rise on the legs of the rear area, so some consider it an occasional bipedal animal.

This theory is supported by the fact that he had a pelvic girdle, which turned out to be quite deep, which actually gave him more support.

We must also mention the pectoral girdle , which was graceful or slender, which is strange for a four-legged animal, since it does not allow the use of long or thick extremities, in addition the sail could have incorporated muscles that would give strength to the spine and its long tail would be an ideal counterweight.

They had an elongated skull with muscular structures that gave them a powerful bite, and they had sharp, serrated teeth of various sizes, perfect for a predator.

What makes Arizonasaurus different from other similar species is the fact that it had a deep pit hidden from view, which was located just at the posteroventral edge of the maxillary process pointing upwards, and a tongue and groove joint between the pubis and ilium bone.

In addition, his skin was thick and scaly, giving him extra protection from potential threats.

Despite all this information, little is known about the Arizosasaurus, since only two specimens have been discovered, the first in 1947 by a researcher, Samuel Welles, which contained only a few teeth and a jawbone. 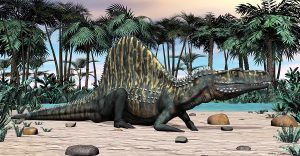 And the second was discovered in 2002 by another incredible paleontologist called Sterling Nesbitt and this one was more intact, only it was missing part of the limbs and tail, so it was fundamental for the study of the species.

These two skeletons are now in a museum located in the city of California (USA).

As only 2 specimens have been discovered, it is said that this animal only inhabited areas of today’s North America, a total of approximately 243 million years ago.

The Arizonasaurus lived in the Middle Triassic, and at this time, the order of the dinosaurs was not yet walking the Earth, so species like the Arizonasaurus were the predators at the top of the food chain on the planet.

Although the term predator already implies this information, we take the opportunity to mention that the food of this prehistoric animal was absolutely carnivorous.

Belonging to the order of the Rauiskians, it can be expected that their food was similar to that of other species of the order, so it can be said that they fed largely on other creatures of aquatic class and smaller size.

But it could also have fed on other small land animals such as the Rincosaurs.

Not much is known about the behavior of this animal, but many paleontologists consider it a maximum predator, indicating that its possible greatest enemy was simply other members of its species.

This dinosaur in our culture

The Arizonasaurus has not achieved as much fame as its other cousins with sails on their backs, so it is not widely represented in popular culture as films or series for children.

If you’ve heard of Arizonasaurus, it’s probably in a book or website or in an educational nature.

However, there are enthusiasts who take it into account, so if you want a brilliant Arizonasaurus figure for your collection, you’re sure to find it.

The Arizonasaurus study, which occurred with the discovery of the fossil in 2002, spurred research to find a point at which birds and reptiles separated, and this species helped greatly to argue that this occurred much earlier than previously thought.

This kind of data is really essential for paleontologists and their study of prehistoric creatures, so it is possible to have an understanding of how life has worked on this planet over the years.

Although the Arizonasaurus is not a very well known species, the study of it and its sister species has been of great help for the study of the Arcosaurus, so many paleontologists have dedicated their efforts to the study of these species.

It’s great that you know almost all or all of the animal species that exist, and if you like dinosaurs, learning about species like this one can help you better understand the pro-evolution processes that led these animals to dominate the Earth.