The gigantic dinosaur of the argentinean Rioja

The Riojasaurus is one of those dinosaurs that attracts a lot of attention because of its height, its elongated neck and its great weight. We will see what it was like, what its main characteristics were and learn about the history of this Riojasaurus.

Main characteristics of the Riojasaurus

The Riojasaurus is a genus of dinosaur represented by a single species. This species is called Riojasaurus incertus and lived in the Upper Triassic period, approximately 220 million years ago in the lands now occupied by the province of La Rioja in Argentina, from which it takes its name.

It was approximately 11 meters long and 3 meters high with a weight of 23 tons. The bones of his legs were very heavy which prevented him from rising on his hind legs and turned him into a quadruped dinosaur. In addition, both their front and hind legs were the same size.

Their teeth were blade shaped and sawn and their upper jaws had 5 teeth in front and 24 behind them in a row that ended just below their eyes. This allowed him to crush the plants before eating them because he was a herbivore dinosaur.

The first fossil remains of the Riojasaurus were discovered by the famous Argentine paleontologist José Fernando Bonaparte in the Los Colorados geological formation of the province of La Rioja (Argentina) in 1969.

In this excavation, a large part of the skeleton was found, although the skull could not be found. Despite this failure, archaeologists were able to draw a profile of this dinosaur while the skull was reconstructed taking into account that of its closest relative, the Melanorosaurus. 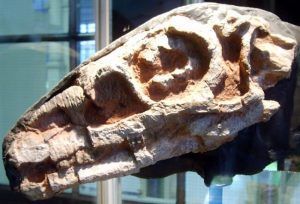 As mentioned above, one of the most important characteristics of the Riojasaurus was that it was a herbivore dinosaur. Its daily diet ranged from low ferns to cycads (a plant physically similar to palm trees) and coniferous plants that were easily accessible thanks to their height and the length of their necks.

This huge dinosaur was able to eat over 400 kilograms of food and drink 90 liters of water daily to stay healthy.