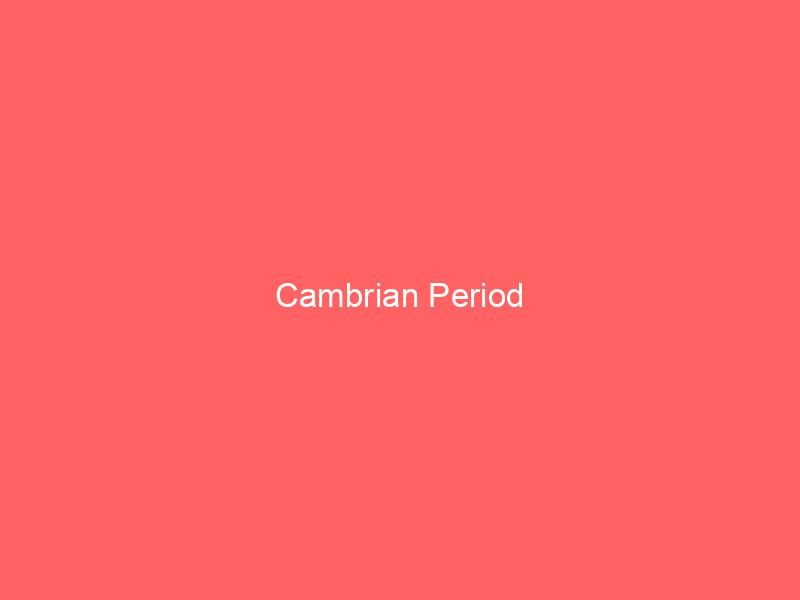 The Cambrian is the first stage of the Paleozoic. It began approximately 542 million years ago, with an event known as the “Cambrian Explosion“.

Before the Cambrian, life consisted of simple single-celled and multicellular organisms, including algae, protozoa, bacteria and a host of class names within each of them.

But nearly 540 million years ago, there was an upsurge in animal life.

Along with these invertebrates, some small animals appeared that would be the center of attention during the next million years: the chordates.

The chordados are a series of animals that possess in their structure a cord called notochord that gives them balance and support, although to be a chordado it must possess 4 characteristics:

The 4 characteristics appear in all chordates, including vertebrates (although in the great majority of them the notochord and the post-anal tail can be seen in embryonic development, not in the adult state), but none of the non-chordates or invertebrates have them.

Characteristics of the Earth in the Cambrian

The planet was made up of a supercontinent called Rodinia. This supercontinent is a speculation, since the remains found indicate its existence, but there are not many current terrains sufficient to describe its approximate shape.

It has been concluded that Rodinia was a land centered south of the equator, although it had some territories in the Northern Hemisphere.

Its fracturing began in the Neoproterozoic, after the first great glaciation of the planet in the Cryogenic Period (850 million years ago), and due to the scarcity of fossil remains (since the fossils with hard parts are from the Cambrian), there are not many data.

Rodinia was, therefore, a fragmented supercontinent, but without life on land, but in the sea.

The atmosphere was not yet ready to support life on land, it was still poor in the oxygen that animals had learned to use, and there were no plants to accelerate photosynthesis either.

The climate of the Cambrian was very warm, there was no ice on the planet. Due to the thawing of the Cryogenic, all the ice on Earth disappeared and the sea water levels were very high.

The Earth was “faster”, since a day did not last 24 hours as now but approximately 20.7 hours, which made a year last 424 days.

The “Cambrian Explosion or Radiation” occurred in the great ocean that made up The Earth due to an environment with a great amount of nutrients that favored the growth of any living being, and to an Earth that had suffered the greatest pollution known of all times: oxygen.

In its beginnings, the Earth did not have oxygen like the gas that all animals breathe today, but was made up of compounds rich in nitrogen and sulphur (the typical image of the Earth full of volcanoes).

The appearance of oxygen was relatively early as soon as bacteria appeared, since a group of these, the Cyanobacteria, took compounds formed by carbon and oxygen and released only oxygen as waste, that is, they carried out the photosynthesis.

This oxygen was a very electro-positive gas, which allowed a longer metabolic chain and, therefore, a higher energy production.

The microorganisms went from being anaerobic to being aerobic, later they learned to use the resources that surrounded them better since they had a compound that contributed a lot of energy, and they were changing and forming new complex structures that allowed them to form animals.

Among the most important chords appears Pikaia gracilens, which we can consider the first chord and therefore the first fish in history, although the Haikouichthys fish, with similar characteristics, is also important.

These fish were agnates, that is to say, without jaws, and they possessed a series of muscles that ran through the whole body called myotomes, which allowed impulses similar to the current fish.

Among the invertebrates, the arthropods such as the Trilobites are noteworthy, but there were also brachiopods and bivalves similar to the current ones.

End of the Cambrian

The end of the Cambrian, approximately 488 million years ago, is characterized by a drastic drop in temperature, giving one of the worst glaciations on the planet as it caused the first and one of the largest extinctions of animals on the planet.

This drop in temperature caused the freezing of the surface layer and several meters deep of the seas at various points on the planet, mainly at the poles.

The drop in temperature was terrible for warm water animals, such as many trilobites and Anomalocaris, but the trilobites managed to survive, although their extension on the planet would never be the same as in the Cambrian.

The mass extinction means a negative and a positive point in the evolution of animals: the negative is the loss of these, but the positive is that there are still free niches for those who survived to occupy them and differentiate, evolve and obtain new ones.

These empty niches were favorable for the ancestors of the vertebrates, since the first real fish would appear in the next million years.