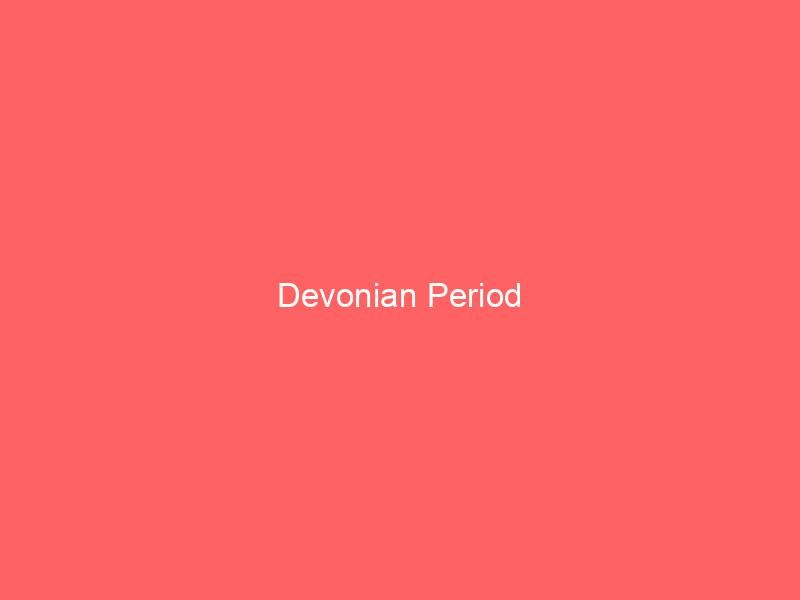 The Devonian is the fourth stage of the Paleozoic. It began approximately 415 million years ago, with an extinction at the end of the Silurian but without a great loss of biodiversity.

In the Devonian, great appearances occur, such as the first fish with real teeth like sharks and the beginning of vertebrates on land, as well as the first forests.

Characteristics of the Devonian

The Devonian period consists of high water levels, with a concentration of atmospheric oxygen approximately 20% lower than at present.

This concentration of oxygen was a blockage for the arthropods, since their size is a function of the amount of oxygen they acquire, so in the oceans they could reach large sizes while on land the previous scorpions began to be similar in size and shape to the current ones.

With respect to the Silurian, there are no big differences, only that the concentration of atmospheric oxygen is increasing because the vascular plants are beginning to reach large sizes. But with respect to water levels, they are still similar.

As for the emerged land, the continents continue to move, forming a “pre-Pangea”. This predecessor of the late Paleozoic and early Mesozoic supercontinent began to form about 390 million years ago, as the northern continents like Baltica and Laurentia continued to collide and come together, and now Siberia is also beginning to merge, and together they are beginning to approach Gondwana, causing the Tethys Sea to become smaller and smaller.

A day lasted approximately 22 hours, and a year it took 399 days.

Vegetal life of the Devonian

At the end of the Silurian, plant life consisted of small, dichotomous branching plants that would soon give rise to simple ferns.

In the Devonian, these ferns reached large dimensions in later stages as Lepidodendron, a large tree fern.

The ferns were already the first vascular plants, although it would take millions of years for conifers and the first seeds to appear.

The ferns caused an increase in atmospheric oxygen levels during and at the end of the Devonian, which facilitated the exit of vertebrates from the water to the land.

Water animals of the Devonian

One of them is that they develop real teeth, although there are still giants without teeth but with hard plates and powerful jaws at the beginning of the Devonian like the Dunkleosteus.

Among the species that appeared in the Devonian seas, one of the largest predators that has survived to this day is the shark.

These cartilaginous skeleton fish began their radiation 390-370 million years ago, with forms very similar to the present ones but that still had to improve in order to become the great oceanic hunters of today.

At this time, a fish appeared that has survived until our times without practically any change: the coelacanth Latimeria chalumnae. This fish, which is about 1.8 metres long, is a living fossil, a jawed fish with bony plates practically the same as the fish of the Devonian.

The mainland began to be an environment conducive to the life of vertebrate animals. Primitive fishes evolved, and from their pectoral and pelvic fins the front and rear legs were formed.

The first vertebrates to roam the land were amphibians, and they already possessed lungs which could take in oxygen directly from the atmosphere.

The first amphibians had limbs with many fingers, as in the case of the Ichthyostega and the Hynerpeton.

These amphibians could live on land, but they could not be independent of water. Amphibians have a life cycle in which water plays a very important part, since the young are born and grow up in it.

The young, unlike the adults, have gills and not lungs, so they have to go through a metamorphosis similar to that suffered by frog larvae to reach the adult stage.

End of the Devonian

The Devonian period comes to an end about 360 million years ago, due to a series of extinctions that lasted about 20 million years.

During these extinctions, a large number of marine invertebrates were lost, including a large loss of the stromatoporoid reefs that formed during the Silurian.

The causes of these extinctions could be due to the fact that, as we said at the beginning, the ocean is a gas sink. Plants began to form more oxygen but in turn increased the amount of other compounds, mainly different organic acids and carbon compounds.

These organic acids and carbon compounds would enter the ocean by loss of leaves, dissemination of seeds, with the death of these specimens or diffusion of excess gases from their metabolism to the atmosphere, causing an acidification of the latter that would affect marine life, since their livelihood was changing and not only made it difficult for them to survive but also damaged them.

This acidification and loss of coral can be seen today with large coral reefs, which are suffering from environmental acidification similar to that which occurred 360 million years ago.