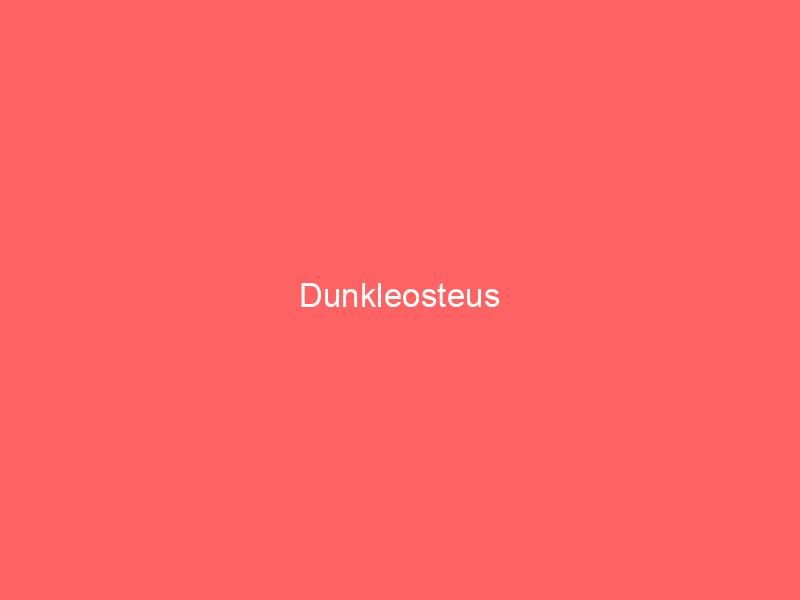 In the genus Dunkelosteus appear a series of placodermic armored fish that lived on planet earth approximately 360-370 million years ago, in the Late Devonian seas.

In this article we will talk about the terror of the seas, a beast of about 6 meters long and armored head, terrible and violent, which also had a bite as strong as a crocodile.

This great predator could even eat its own kind if it wanted to. If you feel intrigued by this prehistoric animal, read on and discover below a wide and detailed information about the Dunkleosteus.

Taxonomy of the Dunkleosteus

As you can see below, many species belonging to this genus have been discovered, however, the species D. terrelli deserves a special mention since it is considered the type species, that is, the one on the basis of which all the scientific description we have at present has been made.

The first remains of this prehistoric aquatic fish were found in 1867 on the shores of a lake located in Sheffield Lake (Ohio), the discovery was made by Jay Terrell.

This discovery would later be described by the American researcher John Strong Newberry, in 1983, who would call this first discovery Dinichthys terrelli.

This name means “terrible fish”, and the remains found in this first instance are currently on display at the American Museum of Natural History in New York and consist of a partial skull and several vertebrae.

Later this genus was called by Lehman in 1956 Dunkleosteus terrelli, being this name the most accepted by the scientific community.

Designating the name Dinichthyidae as a superfamily, which groups a large number of fish with some characteristics similar to Dunkleosteus, although obviously in this superfamily we find several genera that can be distinguished perfectly.

From the genus Dunkleosteus a good number of species have been found, the most representative being the following:

The life of Dunkleosteus on planet earth

According to the fossil findings of the Dunkleosteus, it lived in the Devonian period approximately 390 million years ago, in the territories we know today as Poland, Morocco and North America.

Its habitat was characterized by being deep water, reaching more exactly the photic zone. It was always found near the coast and rarely hunted in the open sea.

Many researchers point out that it was at the top of the food chain at the time, it has even been said that it was a cannibal. This was deduced after traces of bites were found in the remains of a Dunkleosteus.

In the fossils found, evidence of fish bones, semi-digested remains and fish parts were found in its stomach cavity.

It could not chew, so it had to swallow large pieces of meat, this is determined since many half-digested fish remains were found in the Dunkleosteus fossils.

This makes us think that it was very possible that this fierce prehistoric animal regurgitated the bones of its prey.

As we had already mentioned, he was surely at the top of the food chain in his time, being the biggest predator of the moment. thanks to his strength and behaviour. Let’s remember that he was very aggressive and territorial in a big way.

In his time he was undoubtedly the king and few predators faced him, he was even considered a super predator.

It is considered that he coexisted with mollusks, acanthus, arthropods, sharks and other placoderm, although few were capable of confronting him. Perhaps Stethacanthus was the only one that could contain this large predator.

In its behavior at a general level it is believed that it was a very territorial fish, so it was very violent and attacked with great ferocity to the intruders. Behaviour that was most intensified in the mating season.

In the mating season, fights between males were wild and very violent. Given the mating, the female would go to shallow water, where they would lay their eggs.

Later on, when the little Dunkleosteus were born, they would feed on the small fish in the area and gradually they would go into deeper waters and perfect their hunting skills.

It is speculated that this large fish could reach a length of approximately 6 meters and weigh a ton.

The Dunkleosteus had a large head in relation to its body. In addition, it was armoured with strong bone layers on its head and neck. It was one of the first fish to have a lower jaw.

There were no teeth in its mouth, although it was certainly constructed of bony plates that were very sharp on its edge, making it easy to slice up its prey and break bones easily.

On the other hand, we must not forget that this animal had a great bite force, practically the same was lethal.

To be more exact, the Dunkleosteus could develop a pressure of 55 MPa, which is equal to the biting force of crocodiles.

It had a hydrodynamic body with a long tail, on the color of this fish it is believed that it could have had a reddish hue with a silvery belly, although this is not usually observed in the reconstructions made.

The part of its body that was not covered by bone shells was composed of cartilage, and the shape of its body structure and fins was somewhat similar to that of today’s sharks.

A few facts about the Dunkleosteus