The Permian is the sixth and final stage of the Paleozoic. It began approximately 290 million years ago, with a rise in global temperature due to the near final formation of Pangaea.

The Paleozoic Era is composed of several periods: 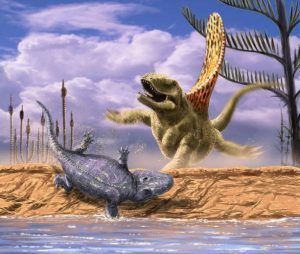 Characteristics of the Earth in the Permian

This change of temperature from the beginning to the end of the period could be due to the great seismic and volcanic activity that affected the planet.

The increase of volcanic activity was already predestined when the continents of the Silurian began to join together to form Pangaea, due to a great number of movements of tectonic plates that caused the collision of the continents for their formation, and the movement of plates can produce earthquakes or volcanic eruptions, which favored the change and the Great Massive Extinction of the Permian.

Pangaea would finish forming in the mid-end of the Permian, constituted by a great central desert to which only the primitive conifers, lichens and some types of ferns that supported the extreme environments resisted. Although a solid continent had been formed, to the east there remained a region that formed the Paleo-Tethys Ocean, which in the Triassic would form the Tethys Ocean.

Plant life in the Permian

Among the plant life there is not a striking appearance, conifers reign because they can survive both cold and hot extreme climates. There is a decline in ferns, which in the Carboniferous were the only tree types.

In the Permian, the large and dense coniferous forests disappear, only clusters that surround the entire globe remain but without forming dense forests. Tree forms have not disappeared, they are just less frequent.

As we reach the final stage of the Permian, the tree species begin to be less frequent, reducing to rounded shrubs to better support the extreme hot climates.

Among the animals of the Permian appears a group that will be the base of the mammals: the pelicosaurs. The pelicosaurs are the ancestors of mammals, the first synapsids (a single temporal pit).

The first ancestors of the turtles also appear, some anapsids (without a temporary pit) but which are about 1.5 meters long or even longer, the famous Scutosaurus.

Pelicosaurs are also called reptile-mammals, because they already had some characteristics that differentiated them from reptiles and brought them closer to mammals.

Among them, the possession of a single temporal fossa in the skull (characteristic of mammals), they also began to develop specialized teeth such as canines and incisors, and it is thought that they could already regulate their body temperature.

Among the pelicosaurs there are herbivorous species such as Edaphosaurus, and carnivorous species such as Dimetrodon or Secodontosaurus, both with the characteristic dorsal sail that turned out to be an expansion of their spine, and which is thought to have had something to do with the regulation of body temperature or the attraction of the opposite sex.

But there were also species which did not possess such a striking dorsal fin, such as the Sphenacodon which only possessed a small extension of the dorsal spines for, it is believed, the attachment of powerful muscles.

Locomotion was a great advance, since they went from the reptile movement of having to bend part of their body in order to advance their hind legs, to a locomotion in which the legs were below the body and could take long strides.

In addition to locomotion, these animals may have developed primitive hair for better body regulation due to extreme weather, and also the development of sweat glands to be able to cool the body in the hottest times of the day.

But it was not only formed by giants, other smaller animals also constituted the group of reptile-mamiperoids of the end of the Permian like the Difinodons.

These small animals of about half a meter in length were herbivores with a kind of beak and 2 fangs which constituted one of the few groups which survived the Great Extinction, providing a base for a new beginning after the end of the Permian.

After the great extinction, the Earth was rebuilt with a few species. Among them, conifers that had resisted thanks to their resistant seeds that could withstand adverse conditions that the adult tree could not, allowing the formation of new and vast coniferous forests to sustain the new herbivores.

With the Permian, the first era of animals that traveled the planet Earth came to an end, the Paleozoic ended, and a new era of giants began, the Mesozoic or also known as the “Age of Dinosaurs”.