In this article we are going to introduce you to the Scutosaurus, an armoured dinosaur, of which, being very daring, we could think, and better for our own sake, that it would be the great representation of what turtles are today.

Hey! That is a comparison, we are not saying that both are related, but when we describe it later you will see how you will remember the turtles ?

So before you start ranting better read that we told you everything about the Scutosaurus and give us your opinion on whether we were right or not, do you think?

Before we start describing him, we will tell you that his name, Scutosaurus, means “shield reptile” or “shield lizard” and now you will know why…

His entire body is covered by a large, heavy shield of bone plates.

This characteristic, added to its dimensions, makes its legs to be located just under the body to be able to support all the weight and to be able to move, although as you can imagine, its movements would have to be slow.

And how big was this little bug? It could be about 2.5 metres long from head to tail, 1.5 metres high and weigh half a ton.

Getting back to its legs… these are short and sturdy, where the front legs are “angled” and the hind legs seemed to be straight. They have five toes with powerful, long claws that he used to dig with.

All of them are spikes and horns. He has a horn on his nose, two robust horns, one on each side of his lower face, which serve to protect his neck from possible attacks by predators. 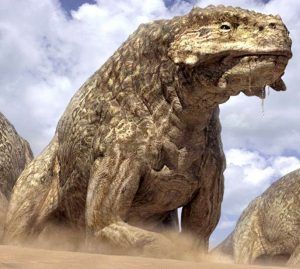 It also has a necklace of sharp bones at the back of its head as well as a back prepared to repel attacks from other dinosaurs.

As you can see, all this armour makes it an almost indestructible dinosaur as it has all the areas of its body protected.

Besides having a robust and full of strength, which makes it look like a battleship, it also had auditory advantages, because its eardrum was very developed.

Its teeth, arranged in a rounded jaw, are large and sawn into the shape of a blade and are well prepared to cut and crush the vegetation on which they fed.

And to finish with its description we will tell you that its tail was short, similar to the one that turtles have ?

When and where did the Scutosaurus live?

The Scutoraurus lived during the upper Permian period, that is from about 252 to about 248 million years ago in what would be today Siberia, Russia.

It was a sociable animal that lived in a group, but it is believed that these groups were composed of few members.

In the same way that it is estimated that they were in small groups migrating from one place to another in search of what to eat, since in the Permian there was a dry and arid climate, where both vegetation and water were scarce.

And it must be said that thanks to its physiognomy the Scutosaurus could walk several kilometers in search of food and water without making a great effort.

This was a ramonero dinosaur, that is to say, a herbivore, since it fed on the low branches of trees and bushes, leaves and all kinds of vegetation, which it is believed to have found on the banks and alluvial plains.

We wouldn’t want to finish this post without mentioning the fact that several specimens have been found which has made it easier to complete several skeletons of this armoured dinosaur.