The different types of dinosaur footprints 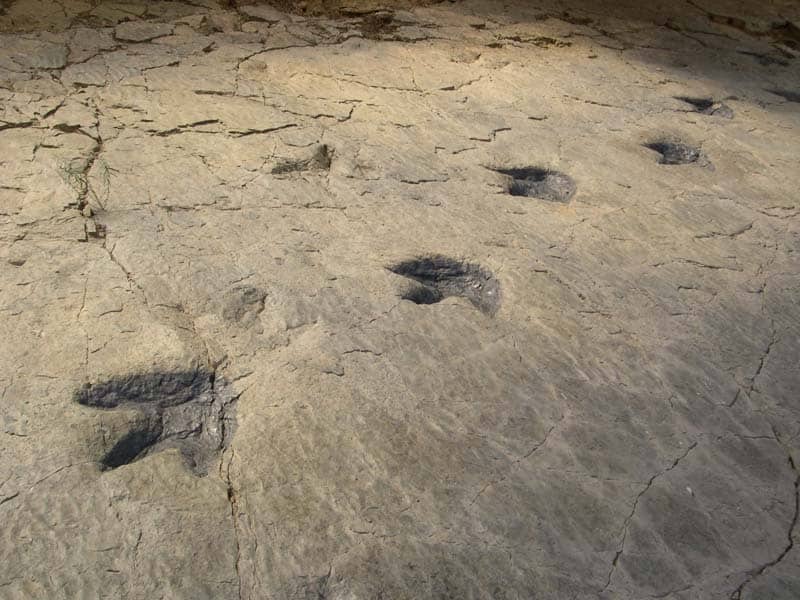 If today we are aware of the existence of dinosaurs, it is largely thanks to the various and interesting discoveries that have been made throughout history throughout the planet.

It is through these finds that we learn more about dinosaurs.

Their habits, their characteristics, what did they eat? How did they live? Why did they become extinct? All these questions have their answer in some important finding, such as dinosaur footprints; so… Why don’t we look at the types of dinosaur footprints? Go for it!!

In a previous post, we already differentiated the types of dinosaurs that existed depending on the shape of their hips (saurischians and ornithischians). Well, today we are going to do the same but observing the footprints left by these incredible Mesozoic animals.

Process of creating an ichnites

The first thing we need to know is how dinosaur footprints have lasted over time, also called footprints.

For a dinosaur footprint to last millions of years almost intact on earth, there must be many factors that improve or benefit its conservation.

But a simple example of how they could have been formed would be primarily due to the high weight of the vast majority of dinosaurs and the high pressure they exerted on the ground. If we add a muddy or moist soil to this and subject it to the pressure exerted by the footprint of the dinosaur, we obtain as a result a greater depth of the footprint and a better settlement of it. Subsequently, the soil dries and allows the maintenance of the footprint over time.

The best soil on which footprints are preserved are clay soils with a certain degree of flexibility, typical of some river banks.

It must be said that the study of these vestiges is not a short and easy process. The ideal conditions have not always been met for all traces to endure over time.

But thanks to the dinosaur footprints that have been found and have been studied, it has been possible to estimate the length of the dinosaur, its weight by the depth of the footprint in the ground where it was found, its size and speed depending on the distance between tracks, etc. 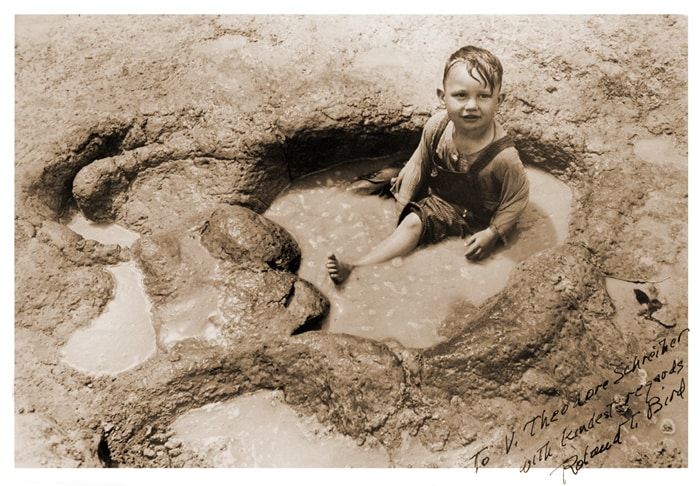 Up to 3 different types of footprints can originate from the moment it is stepped on until it is fossilized:

How do we differentiate the tracks?

We can differentiate dinosaur footprints into 4 large groups: Theropod, Ornithopod, Sauropod and Thyreophorewhich were differentiated by the shape and characteristics of their footprints.

Its hind legs had to support the entire weight of the body, so some of the impressions on the ground become very specific, even the pads differing.

In the case of non-avians, it is characterized by being tridactyl (although theropods had 4 fingers, the fourth did not remain imprinted on the ground because it was in a more posterior position), the central finger was more elongated, and depending on the entrance of the second finger it can be known if it is the left or right leg.

While in avians the rear fourth finger is visible.

traces of ornithopods they are mainly bipedal herbivores, although sometimes there were quadrupedal ones (such as Hadrosaurs, which were bipedal and also quadrupedal). The footprint is three-toed but wider than long compared to theropods.

The sauropods they left a peculiar imprint, one of the largest in size of the 4 types. Sauropods were quadrupedal herbivorous animals and were the largest land animals on Earth. Their enormous weight facilitated the fossilization of the footprints and, being quadrupedal, the “hand” can be differentiated from the “foot” (front and rear extremities, respectively). They are characterized by being more rounded or oval compared to the other two above and can have a claw that, depending on where it is, can differentiate the left leg from the right.

The Thyreophores They are another group of quadrupedal and herbivorous dinosaurs. Their footprints are few and hard to find, making it more difficult to tell the difference between hands and feet.

It is a more circular and symmetrical footprint than that of Sauropods (they do not have a claw).

The findings of this type of footprint have occurred in areas of little geological erosion and in what was a passageway for dinosaurs. 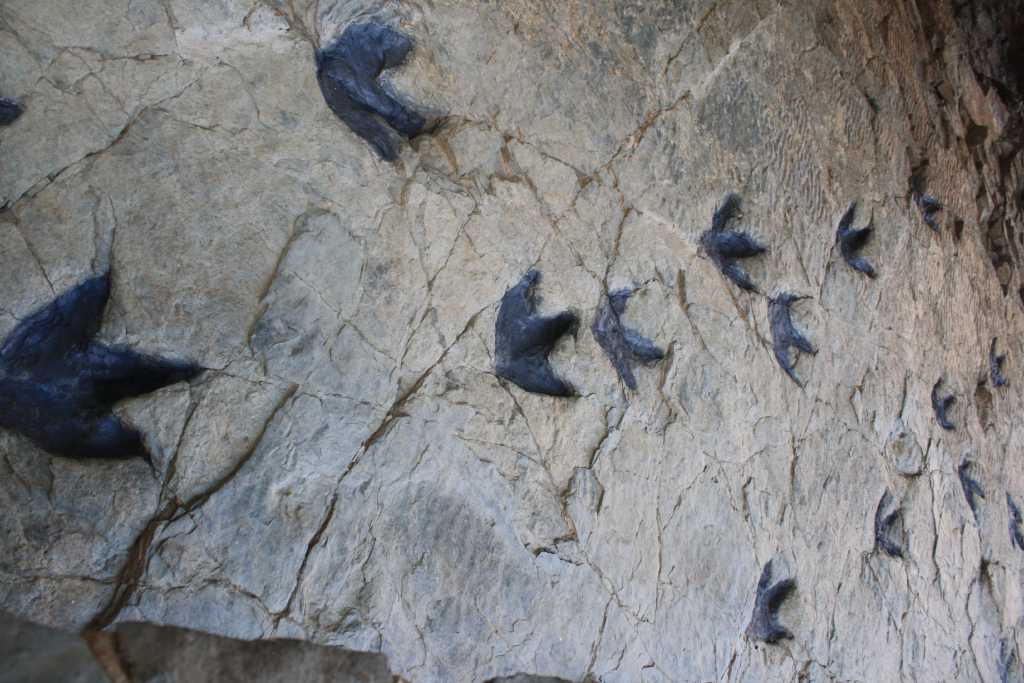 Where have dinosaur footprints been found?

As we have already mentioned, one of the characteristics that the soil must have in order to preserve the footprint of the dinosaur over time is that the soil has to be clayey and this is usually near riverbankswhich can be beaches, rivers, lakes…

So let’s go through the peninsular geography in search of the main dinosaur footprints. Ready? Let’s go!

Well yes! There were dinosaurs in Spain and today it is one of the most important countries in terms of the conservation of footprints and the large number of them that have been found in almost the entire peninsular territory.

Logically, some sites are better known than others, such as the findings in: Asturias, La Rioja, Soria, Burgos, Teruel…

Come on, you can take the kids one day (if you have them and if you don’t, you’re going anyway) and take a few excursions to see and admire the footprints of the dinosaurs in Spain. You will be able to discover for yourself how they lived, if they were nomads, if they lived in groups… In short, you will be able to get to know the main characteristics of these giants that once populated the earth and that we admire so much.

In Asturias, in addition to the dinosaur footprint sites (which I am now going to detail) where you will be left with your mouth open seeing these footprints on the ground, you can visit (and I recommend it) The Jurassic Museum of Asturiasin Colunga.

Before entering the museum you will find replicas of a few dinosaurs in the access meadow and some of their footprints on the ground. It’s impressive! And the children have a blast standing next to each other for the photo (well children and not so children). Then, logically in the museum you have everything related to dinosaurs. In addition to the representations of the skeletons of the dinosaurs and what they were like in “flesh and bone”, you will also find audiovisual representations of their way of life.

Where else can you find dinosaur tracks in Asturias?

We will take into account that the findings of the dinosaurs found have been dated to the Upper Jurassic and are found in the coastal area of ​​Villaviciosa, Colunga and Ribadesella.
The main dinosaur footprints found correspond to theropods, sauropods and thyreophorans.

You can do the route of the dinosaurs in this area of ​​Asturias that was declared a Natural Monument by Decree. Where they stand out: 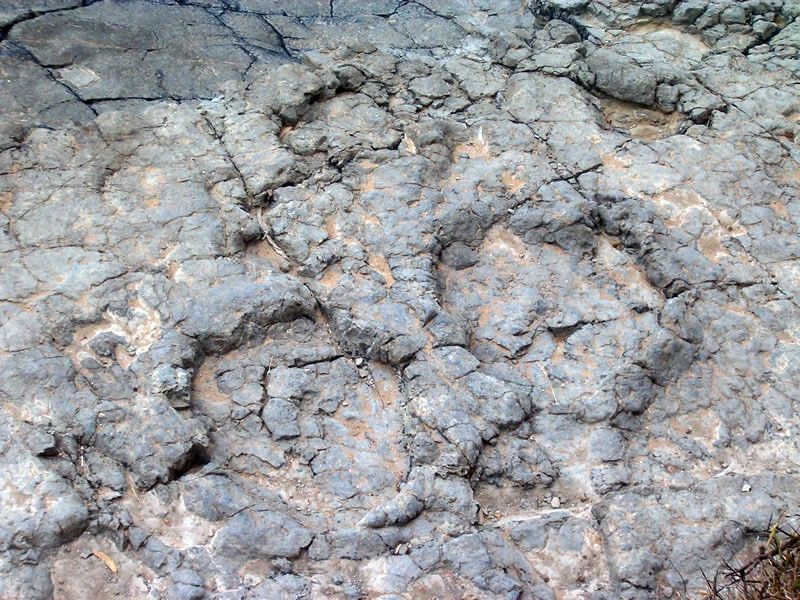 In La Rioja we will also find dinosaur footprints at sites such as Enciso, Munilla, Cornago and Igea.

Also here you can take a dinosaur route that would start at the Enciso Paleontological Center and continue through other nearby sites, where you can see all kinds of dinosaur footprints ranging from theropods from the Senoba, Valdecilla and Icnitas 3 sites and footprints of ornithopod dinosaurs that we will find in the Navalsaz, Cuesta de Andorra and Senoba sites.

To give you an idea, on this Enciso dinosaur tour you can find up to 1,400 dinosaur footprints!

In the southwestern part of the province of Burgos we will find the “Land of Dinosaurs” Route. On this route we will find dinosaur footprints in sites such as La Pedraja, in Mambrillas de Lara. Then we visit the Costalomo site in Salas de los Infantes.
Here, logically, take the opportunity to visit the Dinosaur Museum; and the route would end at the El Frontal site in Regumiel de la Sierra.

The footprints found in these deposits correspond to Mesozoic dinosaurs.

We will find dinosaur footprints in Soria in Villar del Río, in the Highlands of Soria. Where as soon as you enter you find a huge Bracosaur, which is made from those footprints.

Near Villar del Río you can visit the Fuentesalvo and La Dehesa sites, where you will find more dinosaur footprints, as well as a paleontology classroom.

And it is that in Teruel we have a theme park about dinosaurs ideal to go with children, Dinopolis.

This huge paleontological park is made up of sites, museums and yes, also children’s theme parks. A Jurassic Park but without living dinosaurs, although with reproductions, obviously.
You also have 3D movies, reconstructions of the spaces where the dinosaurs lived… let’s go back to a few hundred thousand years ago.

In the province of Teruel, in addition to this theme park, there are 5 museums dedicated to dinosaurs, the last one is the Nummus Sea in Albarracín where the largest marine predator is found, although obviously there are no traces of it.

Although these footprints are outside of Spain, to be more specific they are found in the Libertador Bernardo O’Higgins Region, in Chile, next to the Tinguiririca River.

But they deserve a mention in this post for how well they are preserved and how easy it is to see these sauropod dinosaur footprints in the rock.

It gives the feeling that they just passed a little before you arrived at the place. Incredible!

It seems incredible, right?
How with something as simple and simple as a footprint we are able to get so much information from beings that lived so many years ago.