Theropods – All the info 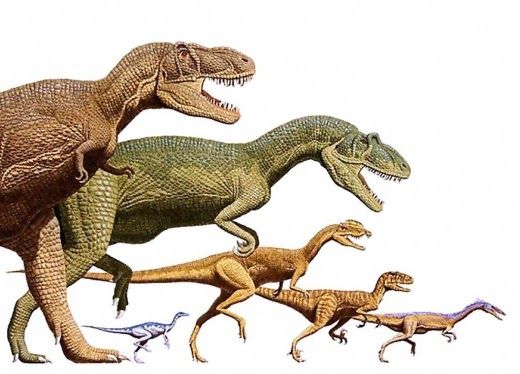 The age of the dinosaurs shows us the great variety of living beings that have existed throughout time on planet Earth.

They were so diverse and different from each other that in order to recognize them, the scientific field has needed to differentiate them by species or subspecies within different branches.

Given the evident diversity, we cannot talk about all of them extensively because it would be impossible, but we can talk about specific cases such as the theropods.

Various theropod fossils have been found throughout human history, specifically in North America, Greenland, Asia, Africa and Oceania. For practical purposes, theropods have interacted on all current continents, although their greatest concentration of specimens is found in North America.

According to the investigations carried out, theropods existed from the Late Triassic to the Late Cretaceous period between about 225 million and 70 million years ago.

Generally, several specimens have been found with practically all their bones and the task of reconstruction has been easier to find out what they were like. Theropods are one of the species of dinosaurs best known to humans and it is estimated that they are the direct descendants of current birds.

The name translates to “beast foot.” It is an order of dinosaurs that is characterized by have extremely light and hollow limb bones. They are generally bipedal and have sharp, curved claws on their feet.

The name of theropods, it was first mentioned in 1881 by paleontologist O. Charles Marsh. At the taxonomic level, it was taken as a suborder that initially only categorized the Allosauridae family, later more families were included (Megalosauridae, Compsognathidae, Ornithomimidae, Plateosauridae and Anchisauridae…among others) to this suborder, becoming one of the most popular.

Theropods have a symptom that distinguishes them from the rest of the dinosaurs that surrounded them, and that is that they were bipedal (they walked on two legs) unlike the quadrupeds that walked on all fours.

According to its saw-shaped teeth it indicates that they were carnivorous. Although some were herbivores like Segnosaurus. Records of this dinosaur suborder date from the mid-Triassic and late Cretaceous. They were widely dispersed throughout the world in a wide variety of sizes and shapes.

Another notable peculiarity of theropods is that not all specimens needed the same amount of meat since everything depended on their size, height and weight. You could find yourself from tiny specimens to giants like the Spinosaurus or the tyrannosaurus rex.

They were obviously hunters although each species had their own hunting strategies. Some hunted in small packs developing different hunting strategieswhile on the other hand many hunted alone, it is even believed that a good number of these were scavengers.

It is estimated that there are several groups of theropods but there are specifically two that are the most distinguished, such as:

Tetanides: in this group there is a wide range of theropod species, among them the tyrannosaurus rex. There are studies that show that they were more agile, intelligent and deadly predators. Ancient specimens of Tetanurans are found from the late Jurassic to the Late Cretaceous.

Ceratosaurids: this group contains the first giant-sized theropods, which precede ancient specimens from the Jurassic to the Upper Cretaceous. It is estimated that this group of dinosaurs belonging to this branch were less intelligent but extremely aggressive.

To talk about these magnificent dinosaurs, the best way is to describe the families of dinosaurs that make up the theropods such an important taxonomic order.

Coelophysidae: Fairly primitive dinosaurs, lived in the Triassic period, survived until the early Jurassic. They were generally small and had a long, flexible neck. They were scattered throughout North America, Africa, and Asia. It was discovered in 1998 year.

Zupaysaurus: These dinosaurs lived during the late Triassic and early Jurassic periods. They could measure up to 4 meters long, 1 meter high and weigh up to 2000 grams. It is believed to have been one of the earliest types of theropods, although some scientists believe it was a sauropod.

Dilophosauridae: A family represented by the Dilophosaurus. These had a characteristic semicircular double crest on their heads that helped them during courtship, they were medium-sized, could reach lengths close to 8 meters and weigh half a ton. Remains were found throughout America, China and Antarctica. It is believed that it hunted in groups and that it was a scavenger on many occasions.

Proceratosaurus: They were small dinosaurs, which had an extended crest in what seemed to be a beak, They inhabited the land mainly in the Late Jurassic period.

Ceratosauridae: This family of theropods inhabited the land between the Late Jurassic and the Late Cretaceous. They were characterized by having a horn at the tip of their nose, they could reach average lengths of up to 6 meters.

Abelisauridae: It lived in the Cretaceous period in the so-called Gondwana territory. They could reach an average of 5-9 meters in length. The largest of this family was the Abelisauridae Carnotaurus. His name means Lizard of Abel. in reference to a paleontologist who discovered the first genus of this family.

Spinosauridae: This family of dinosaurs belongs to the Tetanurae branch. They inhabited the land in the middle Jurassic and the end of the Cretaceous. Their most peculiar characteristic is that they have a snout like that of a crocodile, which is why scientists have suggested that some individuals live in water. The smallest of this family was the irritator and the largest was undoubtedly the Spinosaurus.

Allosauridae: The family of dinosaurs lived about 155-145 million years ago between the Upper Jurassic and the Lower Cretaceous, widely distributed throughout North America, Asia and Europe. These being the best predators of their era, far surpassing the Megalosauridae and Ceratosauridae.

Carcharodontosauridae: The great theropods. Name that refers to the fact that they had teeth equal to those of a shark. His remains were found in Africa, Europe, America and Asia. They had a slightly elongated face. They went together to the family Spinosauridae the great predators of Gondwana.

Neovenatoridae: A family of large carnivorous dinosaurs that lived in the Cretaceous period, approximately 130-70 million years ago. These being a branch of the Allosauroidea family. These were characterized by having a body adapted to reach high speeds, making them fearsome predators.

Dryptosaurus: This is one of the primitive ancestors of the Tyrannosauridae. This family is represented by a single genus, of which only a few bones are known. They lived during the last Cretaceous period approximately 75-70 million years ago.

Tyrannosauridae: This group includes all the relatives of the fearsome Tyrannosaurus rex, and this one. They appeared in the early Cretaceous, and survived the mass extinction of the dinosaurs. They had a huge head, tiny front legs, but a giant tail, which helped them keep their balance while walking.

Ornithomimidae: A family of theropods that lived 100-65 million years, Distributed in Asia and North America. Unlike most theropods, many researchers point out that these were herbivores, characterized by having an elongated neck and a toothless beak-shaped mouth. In fact, it is very similar to birds.

Some curiosities about theropods