What was the ecosystem like where the dinosaurs lived? 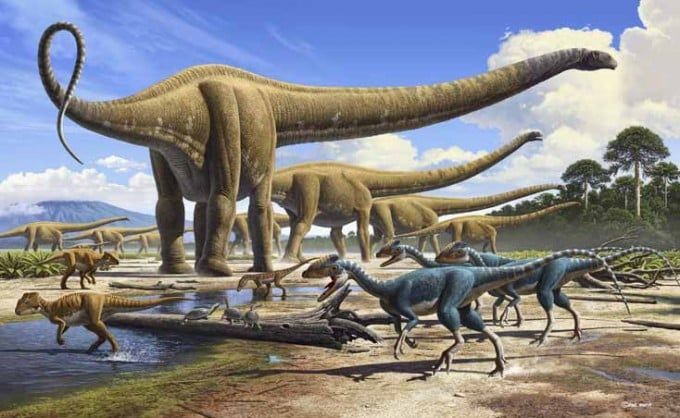 In previous articles, we talked about when the dinosaurs lived and how they were classified into two groups depending on the shape of their hips. Well, today we are going to try to get an idea of ​​the ecosystem where dinosaurs lived in the Mesozoic periodto understand a little more how they lived and thus get a more global idea of ​​the true habitat of these impressive prehistoric animals.

To put ourselves in a situation we must shoot back in time about 248 million years approximately at the beginning of the Mezozoic period. When the Earth was only made up of a single continent: Pangea. Over the years (rather millions) this continent was divided into two: Laurasia located north and godwana in the southern part of the Earth, thus giving rise to a multitude of massive migrations of dinosaurs on both continents. Later, Laurasia was divided forming North America and Eurasia, on the other hand Godwana separated and gave rise to South America, Africa and Oceania. We can then think that there were dinosaurs in all corners of the Earth.

It is believed that climate in the “age of the dinosaurs”» should be rather a hot and dry climate, except for some tropical latitudes. One of the other reasons it is believed to have been a dry climate was the absence of polar ice caps. Areas that had been covered by glaciers in earlier ages were now deciduous forest and tundra, in mid-latitudes, tropical conditions, and in more southern latitudes, an arid climate.

The Earth came from an era of mass extinction It was the end of the Permian period of the Paleozoic era and the beginning of the Mezozoic so the The arrival of the dinosaurs meant filling this enormous gap in species on Earth. Together with them, other reptiles such as crocodiles, turtles and ancestors of snakes and lizards lived and competed. New species of fish, molluscs, swimming reptiles and some species of clams and snails coexisted in the oceans. At this time also appeared the first insects like the butterflies, flies and wasps that pollinated the new species of flowering plants that began to exist, just at the same time they began to appear the first primitive mammals.

As you have seen, it was a very busy time in terms of geological, biological changes and new species, both in flora and fauna, the Earth was in full swing and the dinosaurs had millions of years ahead to roam freely .